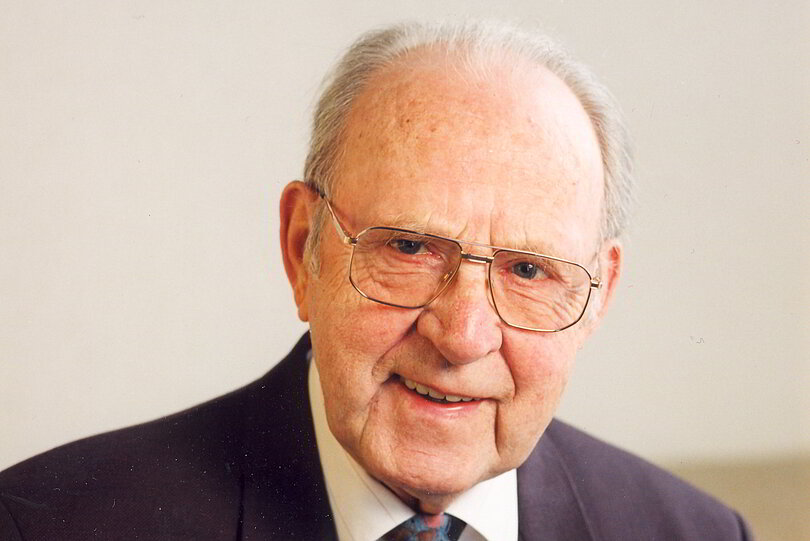 Motto of Karl Kübel: "How may I serve you?"

"How may I serve you?" This was the guiding motto of Karl Kübel (1909 – 2006). Born in Duisburg as the eighth of nine children of the master carpenter Carl Kübel and his wife Maria in 1909, Karl Kübel began his apprenticeship as hardware salesman in 1923.

At the age of 23 he formed his own company, and over the next 40 years he established one of the leading furniture-producing companies in Europe, 3K Möbel. The company engaged 3.800 employees at its peak. Karl Kübel had been offering his employees an internal partnership contract since the 1950s. Karl Kübel's philosophy was formed by the religious faith of his parents and his own analysis of Catholic social theory. His aim was to allow his employees to participate jointly in the development of his company as well to share the profits, and finally to set up a joint ownership with them. During the post-war years, Karl Kübel encouraged the building of family-oriented homes and was involved in development policy matters. In the 1960s, he began to support development projects in Bolivia, Afghanistan, Tanzania and India.

In 1972 Karl Kübel sold the 3K company and donated DM 72 million (appr. 36 million EUR), representing the entire proceeds of the company sale, as well as most of his private fortune, to his foundation, the Karl Kübel Stiftung, which he founded in the same year. German Federal President Richard von Weizsäcker awarded Karl Kübel the Great Order of the Federal Republic of Germany in 1988. In 1995, German Federal President Roman Herzog presented Karl Kübel the "Medal of Merit of Foundations" of the Federal Association of German Foundations. In December 1995 the Commercial College of the District Bergstraße was named after Karl Kübel. Karl Kübel was presented with the Ring of Honour of the city of Worms in June 1997 and in December of the same year with the Badge of Honour of the city of Bensheim.

"How may I serve you?" This motto of Karl Kübel, who dedicated his life to the children and families of this world, will remain and continue beyond his death. Karl Kübel passed away peacefully on the 10th of February, 2006, at his home in Wald-Michelbach in the Odenwald region of Hesse in Germany.